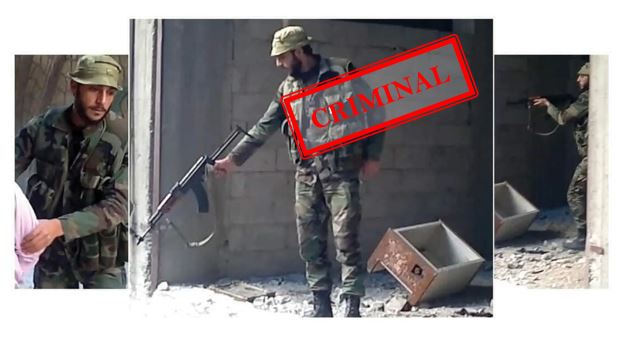 On April 27, the Guardian newspaper published a report including a video on one of the most detailed documented war crimes of the decade-long war of Bashar Al Assad on Syrian people. The video is from April 16, 2013 in Damascus suburb of Tadamon. It shows 41 civilians, all of them unarmed, defenseless, blindfolded, handcuffed, and in shock, were murdered one by one in cold blood, and thrown into a hole. The bodies were then burned in the hole.

While not shown in the edited version of the video, women and children were among those victims.

The perpetrator of this massacre is Amjad Yousef, an intelligence officer associated with the Branch 227, an intelligence unit responsible for the security of the Tadamon neighborhood at the time of the massacre. Yousef still holds a position within the Syrian regime intelligence.

Why does it matter?

How it was captured?

The video mentioned in the report, along with 27 others all of which depict massacre of Syrian civilians, were sent by a young Syrian regime whistleblower to activists in Paris, and then in 2019 brought to the attention of Professor Umit Gungor, an Amsterdam-based genocide scholar. Gungor and his assistant Annsar Shahhoud spent the next 2 years on analyzing the video and searching for the perpetrator online, mainly on Facebook. They were able to identify him, and contacted him through “catfishing”. After several conversations under a pseudonym name, Amjad Yousef eventually accepts that it is him in the video, and he killed those innocent civilians out of revenge.

The video is already provided to several authorities in Europe, to initiate a criminal prosecution process. Yet there needs to be far reaching consequences. Those who have committed the worst crimes against humanity and those who have given orders are still in power. We can no longer live with this impunity. Assad and his criminal gang have to face justice.

Until justice is done, any attempt at normalizing ties with this regime has to stop. The Syrian regime should also be treated as a pariah state at the international and UN platforms, and should be denied to exercise its rights on behalf of the Syrian people, which it does not and cannot represent.

Syria remains as deadly as it has been since the beginning of the popular uprising in 2011. Returning Syrian refugees to regime-held Syria means their imprisonment and possibly death sentence. Syrian regieme is a threat to the international peace and security as long as Assad remains in power.

The report in the Guardian: https://www.theguardian.com/world/2022/apr/27/massacre-in-tadamon-how-two-academics-hunted-down-a-syrian-war-criminal?CMP=Share_iOSApp_Other

The detailed account of the story from the researchers: https://newlinesmag.com/reportage/how-a-massacre-of-nearly-300-in-syria-was-revealed/